We have almost lived in Europe for a month! The time has gone by fast and Donnie is already back at work, and I will join him next week. Our house is coming together, and just like every home before it’s a sanctuary for our family. In between running errands and working, we’ve managed to do a little bit of exploring in our new home and the surrounding area.

The weekend we returned from Budapest was a mixture of unpacking, building IKEA purchases and cleaning the house on Saturday. But on that Sunday we decided to take a drive to see a nearby attraction we’d seen in signs and I’d read about in my tourist book about Kosovo, The Bear Sanctuary. According to GPS, it was just 30 minutes away and there were a few other places I wanted to stop to see along the way. It was a breezy, cool-ish sunny Sunday, so we piled into the car and started off.

Our first stop was just 10-12 minutes away, and it was a Roman ruin called Ulpiana. It used to be a bustling trade city, on the route from the East to the West, but had fallen into ruin about 1500 years ago. It was free and wasn’t crowded, so we pulled into the parking lot and wandered around the three sections. Paul read us the signs and we marvelled at how some of the mosaics and tombstones had survived. From there we piled back into the car and drove about 5 more minutes to see a nearby monastery. The boys weren’t in the mood, so we did a drive by and will save that site for later, then continued on to the Bear Sanctuary. 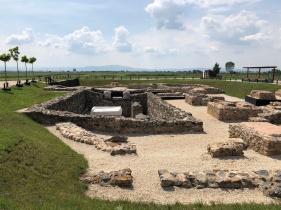 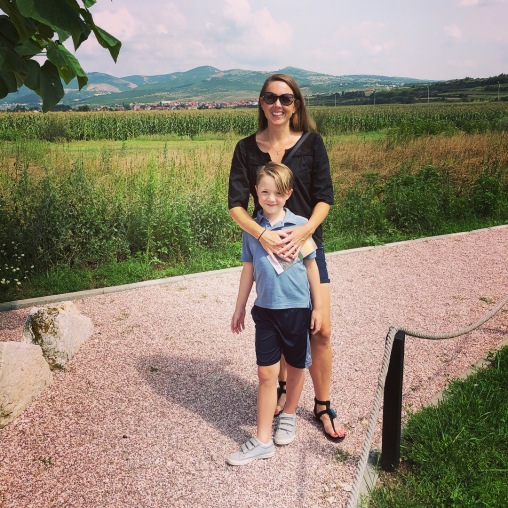 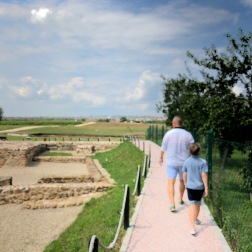 It is located near a manmade lake, that according to my book, nobody is allowed to swim in, but you can fish. As we drove in the hills we saw lots of people doing just that along the winding two lane road out to the Sanctuary. This particular place is where bears go when they’ve been rescued from restaurants or the circus as entertainers. A lot of times their lives are pretty horrible before they get here, and we got to read about a few of them as we wandered the grounds. It’s a pretty big place, but all set on a huge hill, so we only saw 2-3 of the bears who live there. It was cool because some of them got close to the fences and I think that’s the closest I’ve ever been to a big brown bear. We watched one give itself a bath and play in the water and then headed back down to the car. I thought it was really cool, and Paul and Donnie enjoyed it too, but we were all kind of hungry, having not had lunch yet. 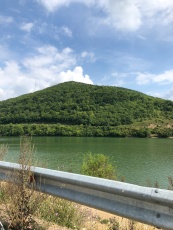 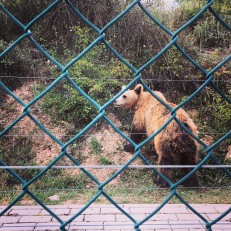 We had seen a nice restaurant overlooking the lake on the drive down there, so we stopped at it on the way back. The view was beautiful, even if the sun was hot shining down on us. After a little while, we moved to a shaded table and enjoyed some local food (a cheese plate, more peppers and creme and some awesome homemade bread), and life was perfect. We ate our fill and took some of the leftover food home to finish off for dinner that evening. It was one of those awesome days that I will remember for a long time, one of the first of many I hope. 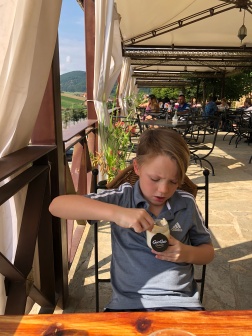 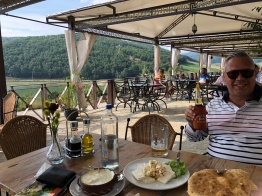 The week was not very eventful, Donnie had to work and so Paul and I spent our days doing Mommy-Paul day camps. Setting a schedule in the morning of activities (and chores!) and then keeping to it. It kept both of us super busy! And it has been fun to have so much one on one time with P. One evening, Donnie picked us up and took us downtown for a delightful dinner at Soma Book Station. We sat on the patio and enjoyed dinner and drinks in a gorgeous setting. It was a little crowded, but I’m assuming everyone tries to get their patio time in when they can, I wonder what it will be like in winter. I hope to get back there soon. 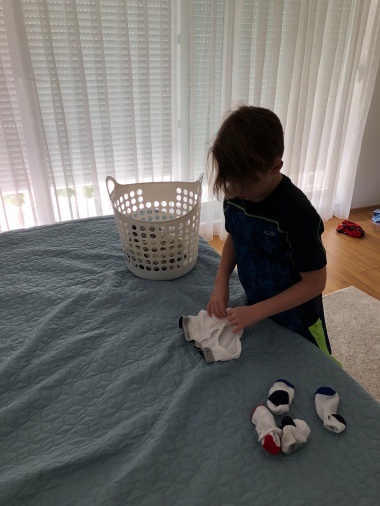 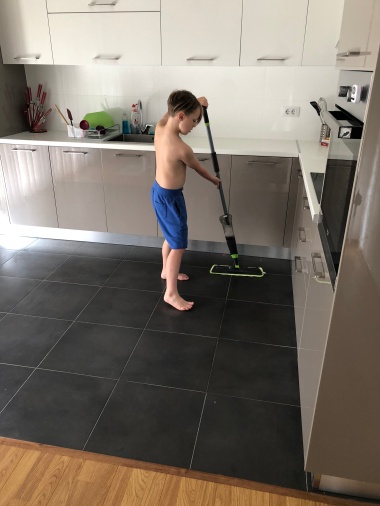 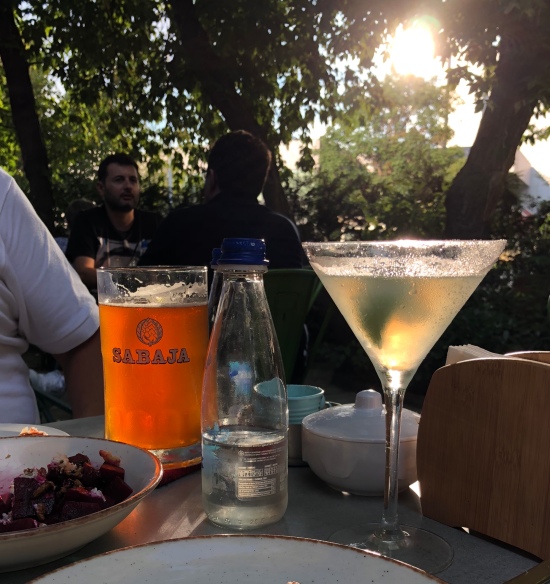 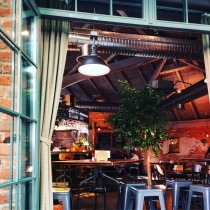 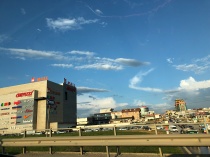 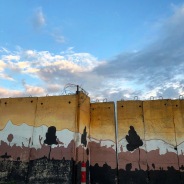 The next weekend, Donnie talked me into going to Thessaloniki for a trip to IKEA and Praktiker ( a German version of Home Depot). We’d desperately been searching Pristina for a gas grill and island for our kitchen with no luck at all. I agreed to go with the stipulation that after we shopped we’d do at least one form of cultural exploration. It would be my first time to Greece, and I wasn’t going to spend it just shopping for household stuff. So we booked an Airbnb down by the water and White Tower, and set off on Friday afternoon.

The drive was long. It’s basically a straight shot down through Macedonia into Greece, and the road is pretty well kept, since it’s a toll road. The borders weren’t too crowded, even though it was a Friday night. It was a little nerve-wracking because we were still having those weird thunderstorms so the roads were a little wet and treacherous at times. Macedonia reminded me of driving in CA to LA with lots of grassy hills and rocky mountains. Thessaloniki is only about 30km passed the Greek border, and when we arrived our GPS took us to the wrong place. We’d hoped it was going to be Praktiker, but no such luck. With time running out before closing time, we reprogrammed and finally found the right place. Donnie had been in touch with the salesman of grills, so he met up with him and the whole thing took maybe 15 minutes. We asked if IKEA was nearby, but they said no….time was running out. So when we got back to the car, we looked it up on our GPS, it was just 6 km away! So we hurried over there and shopped before it closed. We knew what we wanted, and had limited space, so it was literally a 30 min IKEA shopping mad dash. The fastest we’d ever shopped there. After fitting everything into the car, we found our way back into the city to our Airbnb, which had a garage!! It eased our minds to park and just leave the car secure while we stayed there. It was now nearing 10:15pm and Donnie and I hadn’t eaten yet (Paul had IKEA hotdog and ice cream). Luckily, Thessaloniki is a late night city, with most places serving until 2am. We found a place within walking distance and ate a late night meal of Greek Salad and chicken nuggets! The food was delicious and well deserved after such a long day. From there we stopped for some breakfast cereal and milk and headed back to crash for a good sleep. 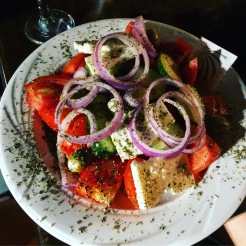 We all woke up late and refreshed, and had a lazy morning enjoying the air conditioning. Around 11am I started to get the urge to explore, and it was our one tourist day so we started getting ready to head out. Instead of hitting the Archeological museum, which I had planned, we decided to take the hop on hop off bus around the city. It was 25 euros for all of us and we could use it all day for transportation as well. We walked down to the White Tower and jumped on around 12:30. It was HOT. We sat on top, with little shade and only the breeze when we were driving. It was cool to see the city that way though. It gives a good feel of where things are and a glimpse at places you can note and go back and see later. We got off at the top of the hill at the castle, and had some cold drinks before doing some wandering around the castle wall (all there was left of it) and some souvenir shopping (I got some cool coasters and Paul bought a wooden axe (???? I think Minecraft is overtaking his brain…). We then hopped back on the bus and headed down, in a much cooler, covered seat. We arrived back at the White Tower around 3pm, too early for dinner, so we walked back to our place for some A/C rest time. We were back out on the streets by 4:45pm though, seeking out dinner and then some craft beer. Dinner did not disappoint. We had more salads, yummy white table wine, a huge pile of cheese, some roasted vegetables, and of course, french fries. We ate our fill and then walked down the block to the craft beer place Donnie had found called, The Hoppy Pub. They had some good selections including a gose and milkshake IPA, so after a few we walked home during the sunset along the water. It was a very full day, and we were all tired and a bit grumpy by the time we reached home. We all did our own thing (reading, minecraft and watching tv) before heading to bed for our drive the next day. 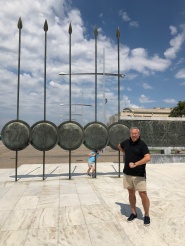 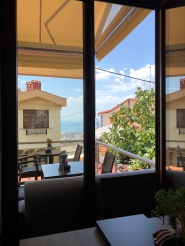 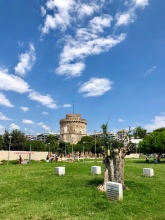 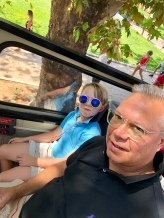 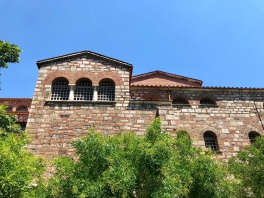 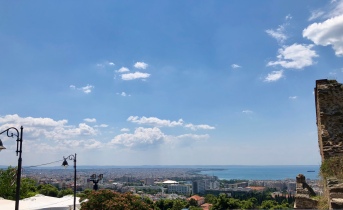 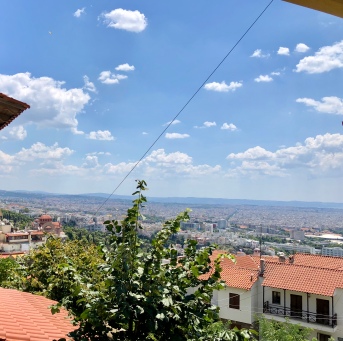 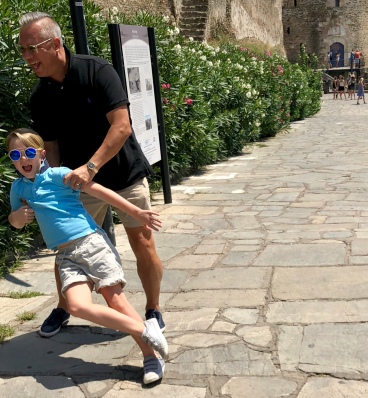 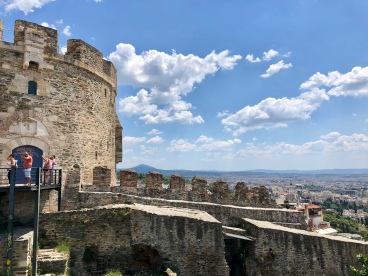 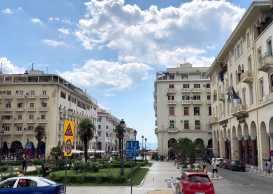 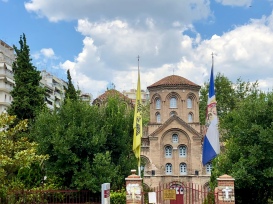 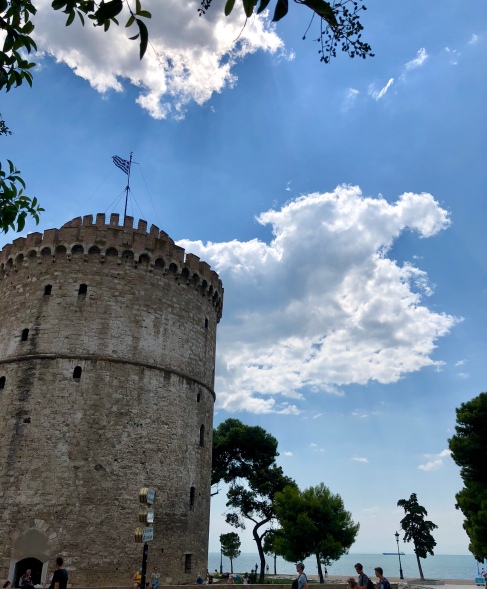 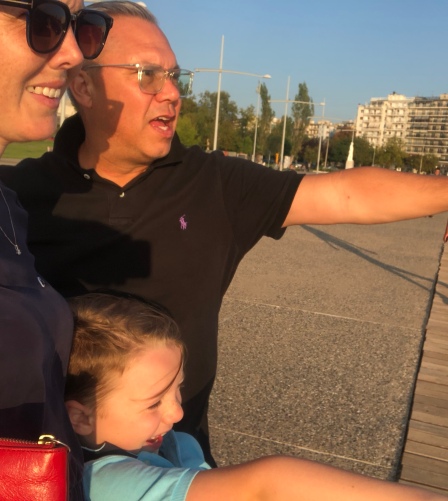 I had every intention of going for a waterfront run, but my bed was too comfy and cool and I didn’t want to make us late getting on the road. So after repacking the car and a quick stop at Starbucks, we were on the road. I drove most of the way, and actually really enjoyed it. The borders were a little more busy that before, but we were home in less than 5 hours, so it was a good ride. We settled into the afternoon projects of building our purchases and finished out the evening with some grilling on our new grill! A busy but fruitful weekend.

This week has been more of the same, Donnie heading up to work and Paul and I hanging at home keeping ourselves busy. There’s an epic music festival this weekend, but I can’t find anyone to go with me. 😦 Maybe next year I’ll have more friends in town. 🙂

That’s all for now! More on another day! Much love, J