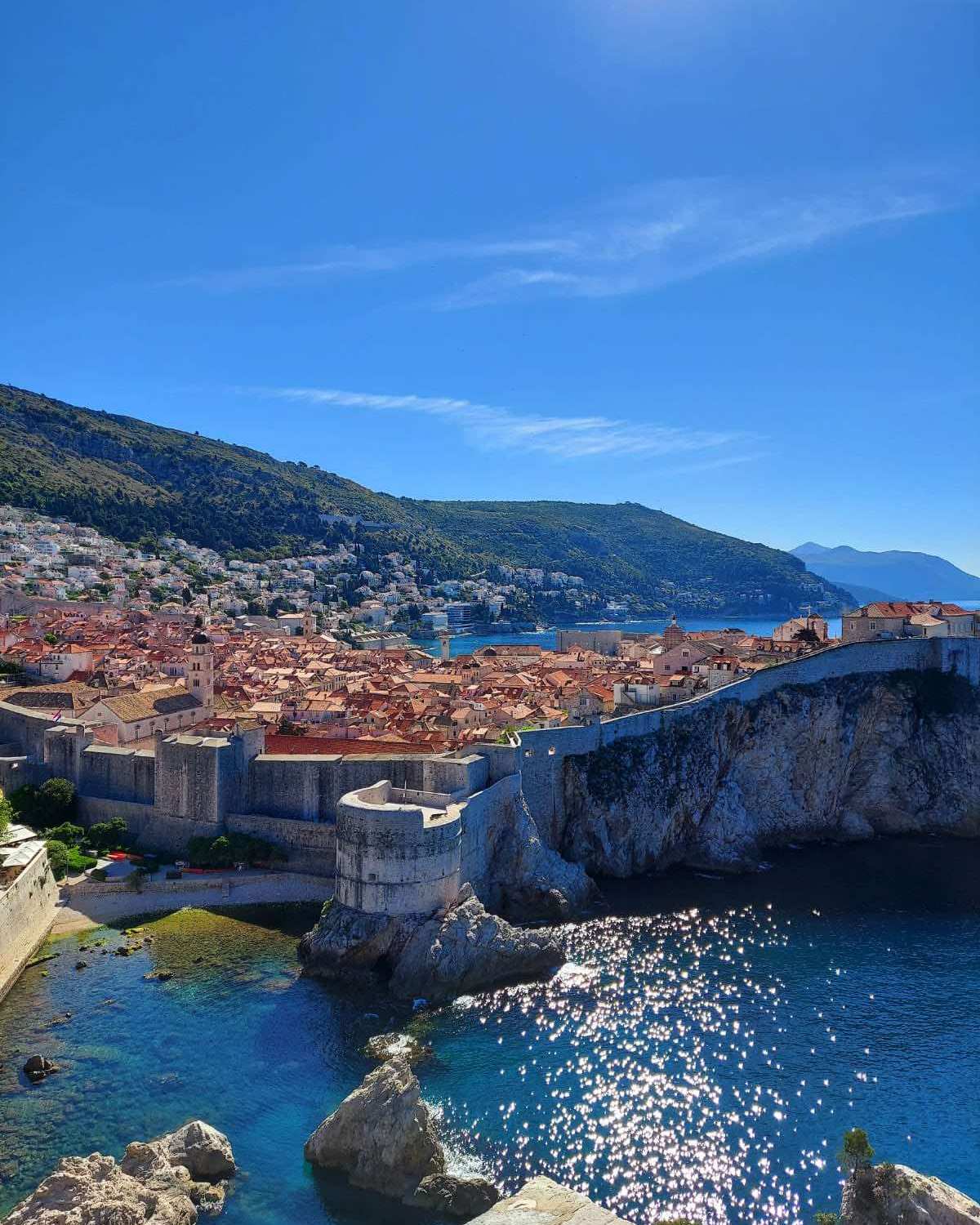 I feel the need to document this trip because it was our first official tourist trip since the COVID-19 pandemic began! Also, it was such an amazing city and I took way too many pictures and videos. I need a place to share them all 🙂

A few weeks ago, Donnie had booked us a hotel room for the night in Dubrovnik in the hopes that the restrictions would lighten and we’d be able to spend an upcoming 3-day weekend seeing a new place. As the date drew closer, we found that restrictions were easing up and if we planned it right with our usual COVID testing, we’d be able to make it happen. So last weekend, we piled into the car after and after picking up our negative antigen tests, we headed to Montenegro.

We got to our house at a reasonable time, 7:30pm, even after stopping at the grocery store for some essentials (water mostly). We ate a quick dinner and headed to bed, because we were planning to rise early the next day to drive to Dubrovnik.

Donnie was up with the sun, a little after 5am and after a cup of coffee, I got moving too. We were all packed and in the car at 6am and we started driving up the coast of Montenegro towards Croatia. The route is only about 150 km, but according to GPS it would take about 3 hours. It was a smooth drive, beautiful views and very little traffic. We took a short ferry across Kotor bay and soon found ourselves at the empty border between Montenegro and Croatia (we even missed it because we thought it was abandoned and we followed some local cars). With all our documents in order (COVID tests, passports, insurance, hotel reservation), passing through the border wasn’t too complicated. We were driving into Croatia by 8:15am. We were elated! It was a new country for all of us to visit and the adventure of it had us excited.

From there, we took a leisurely drive up the coast to a shopping mall on the way to Dubrovnik. Paul has recently outgrown all of his clothes and this mall had a grocery store (for buying craft beer for Donnie) and an H&M to buy some summer clothes for Paul. After about 90 minutes of shopping, all parties left with their desired goods. Paul was outfitted for a comfy summer and Donnie was stocked with local brews and a few snacks for the hotel. We were all getting a little hungry, since we’d not eaten so we decided to push on to Dubrovnik and find a place to eat ASAP.

Driving down to where the hotel was was very exciting, we could see the city from the highway and it was stunning. The hotel itself is right across from the old town and the fortress, and so we parked there and left our stuff to find place to eat. We settled on a restaurant in the sun right outside old town, with a beautiful view of the water, the fortress and the city. It was tourist prices for sure, but not that crowded and the food hit the spot.

After breakfast we strolled back to the car, and Paul changed into some of his new clothes since it was much warmer than we’d expected. We lathered on sunscreen and prepped for some exploring. From there, we walked straight down into the city. The entrance itself is astounding and the minute you walk in, you feel transported in time or like you’re on a movie set. It was mostly empty and we didn’t have a lot of information about what to see, so we just wandered around looking at the old structures, fountains and hidden alleys. I wanted to take photos of everything, but it wouldn’t have captured the beauty or the feeling of being there.

One of the only things we’d researched and knew that we’d wanted to do was walk the city walls. The views were supposed to be spectacular, and since the city wasn’t crowded, there was no line and we just walked up and paid our expensive entrance tickets (around 60 euro for the 3 of us). I couldn’t stop taking pictures! It was a gorgeous, clear, sunny day and not too hot. We walked the entire wall, which culminated in the tower over looking the whole city and the sea. There were very few other people up there so we were able to keep our distance and enjoy the views with little anxiety about COVID or being in other people’s way. By the end of our walk, which took about 2 hours, we were all spent. So we headed back to the car to get our stuff and check into our hotel.

We stayed at the Hilton Imperial Dubrovnik, which was absolutely stunning both inside and out. They upgraded us to a suite overlooking the old town and fortress and gave us executive privileges! It was a beautiful surprise and the room was absolutely amazing. I think it was probably the nicest room we’ve ever had if you consider the location, views and decor. We all decided a rest was in order and after a short rest and a shower, Donnie and I headed out to scout some craft beer. We had wanted to visit 4 different tap rooms, but we ended up sitting outside at the first place enjoying the beer and chatting with the owner for some time. At some point, a man wandered up, inserted himself into our conversation and he became our third wheel for the remainder of the afternoon. It was a quintessential travel situation, a lonely traveler happy to find English speakers who also enjoy craft beer. He claimed to be from Monaco, but was married to a famous bassist and now lived in Scottsdale. He was nice enough, but Donnie and I both agreed he was a bit too clingy and he might of been some sort of con man. It was getting later, so we went to one more beer garden, then left our new friend to walk back and have dinner with Paul at the hotel. We had hoped the lounge would have enough food to satisfy our needs, but we ended the night with delicious room service and a beautiful sunset view. It was a fantastic day.

The next morning was Mother’s Day. We woke up pretty early and had some coffee in the room before wandering downstairs to the empty terrace to enjoy a yummy buffet breakfast mostly alone. It was another beautiful day and I was already lamenting having to leave. After filling ourselves up with food, we headed back to the hotel room to rest and decide what to do. Donnie really wanted to go for a walk because the city was empty and it was still early and cool out. Paul decided he’d rather chill at the hotel and play games, so Donnie and I set off to explore again. I’d seen the sign to go up to the fortress and decided that we should try to see if it was open to explore even though it was a Sunday. We walked slowly over there, taking in the scenery. We even walked by some former sets of Game of Thrones, and it was cool to think the characters we’d watched had been in the same places. After many steps up, we came to the entrance of the fortress and there was a man in the ticket booth. I reached out to pay, but he asked us if we had our tickets from the city wall. I told him unfortunately that we’d left them at the hotel, but he waved us in in any way. We were quite literally the only people there. We wandered the fortress, taking photos, marveling at the former GOT sets and how lucky we were to be the only tourists in what is normally a quite crowded place. From there, we walked back to the hotel and slowly packed up to make the drive back to our house in Bar.

Our 24 hours in Croatia were amazing, it almost felt like a dream. I never felt fearful of the pandemic and I appreciated the space that everyone gave each other. I would very much like to go back one day, but I think it will never be as magical as it was that day. The glow of our first travel adventure, the gorgeous sunny backdrop, and the lack of other tourists made it an unreal experience. Paul genuinely enjoyed it also, and it made my heart happy to see him excited to explore a new place. Makes me want summer to be here so much sooner so we can explore some more! ❤

There is a lot more to write about in terms of other things going on in our lives, but I wanted to focus on just this trip for this post. I’ll try to write again soon. 🙂

Much love to all,