My last post was relatively recent, so there’s no need really to go back and fill in on the happenings of the last week of school before break. But on Saturday Feb 10, Andie and Ben arrived in Shenzhen for 10 wonderful days of touristing, relaxing and eating. 🙂

They arrived directly from Seattle, and after a long brew day, I took the metro out to the airport to meet them. It was actually super efficient and really cheap, but I doubt I’ll ever be able to talk Donnie into doing it. The ease and convenience of a taxi is just too overwhelming. They were tired, and a little frazzled from the Chinese customs and baggage claim, so instead of taking the metro home, we jumped in a cab and headed back to Shekou. Donnie had ordered pizza and when we arrived we ate a late dinner and chatted about their travels, with big plans for Luohu the next day.

After some sleep, breakfast and a run, we all showered and geared up to go to Luohu for some shopping. Donnie was still feeling sick, so he opted to stay home with Paul, which left room in our van for Callie and Amanda to join us. We were on our way at 11am, and I was happily surprised to see most of the LCC was open and operational. We hit the glasses shop first, then wandered the floors looking for goodies for the next couple hours as we waited for all the prescriptions to be ready. We were striking out on few things, so we decided to take a break to have lunch and then went back to shopping. I didn’t buy anything, but I did get Donnie two new pairs of glasses as his personal shopper. Our last stop was to pick up our glasses, and it made me happy that everybody seemed pleased with our purchases. We headed home in separate taxis, and Donnie and Paul were waiting for us to head out for massages. We took them to the same place the Halls had taken us on their last night in China. It was ok, we’d ordered the most expensive massage (110 rmb), which took about 80 minutes. The only down side was that it involved cupping of our feet, which I did not enjoy at all. We did have our private room, and mostly enjoyed the rest of it, but we were all tired. So after some food at Willy’s we walked home through old Shekou and relaxed for a bit before bed. It was a very full first day together. 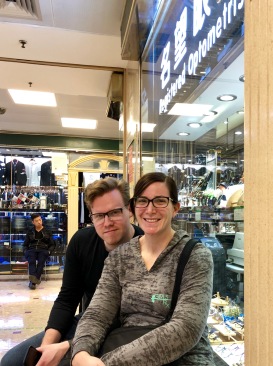 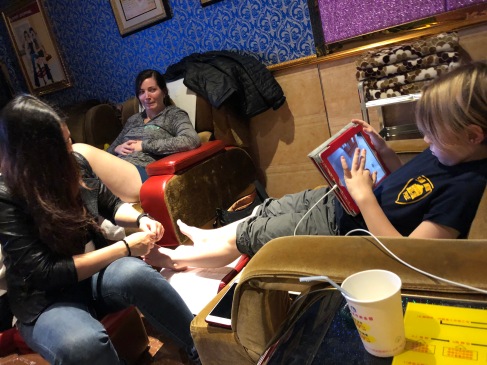 Monday was lower key. The Hales all had to get to school, but Paul had his Chinese New Year performance that day. It was supposed to be long, lots of grades performing, so I zipped over there after it had started to hopefully catch his song. Andie and Ben had met Donnie for lunch so they came to watch also, and they did the cutest performance in costumes as Chinese ‘scholars.’ I think that Paul was pretty happy to have his aunt and uncle and parents there to see him perform. 🙂 After that, Donnie went to buy Andie and Ben ferry tickets for the next day, while they headed to Decathlon for some shopping. We opted to stay home for dinner that night, with Donnie and I cooking some yummy pasta while watching the Olympics. The next day was a half day at school, so I pressured Andie and Ben into coming to hang out. It was our annual CNY celebration at school, with stations celebrating the traditions of the lunar new year. There were Chinese exercises, followed by calligraphy, artists selling wares, Chinese games, dumpling making, Korean games and some martial arts. It was fun, I mostly just wandered with my group and Andie and Ben, but Andie found some cool hand painted souvenirs, and we had fun making and eating the dumplings we made. 🙂 After school was out, we had lunch at the Muslim noodle shop before I took them to catch their ferry to HK. I ran back to school, then came home and relaxed for a while in the solitude before Donnie and Paul came home from lunch with his friends. 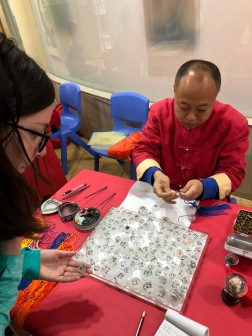 The next day was the first day of our break, so we slept in and relaxed before pulling ourselves together around 3pm to head to the border to meet Andie and Ben in HK. The border wasn’t too bad, and we made it to the hotel around 4:30pm and after checking in, having our welcome drinks, we all decided it was time to go out and find some dinner. We took them to TAP: The Ale Project, and dined on awesome sandwiches and yummy beer before walking back through the crowded streets of Mongkok to our hotel. It would be a later start in the morning to go to Ngong Ping, so we slept in and had a big breakfast before setting out. 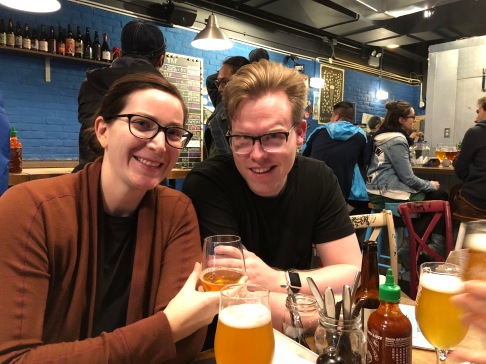 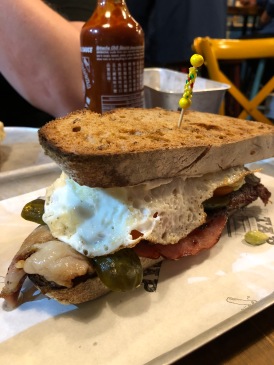 We had pre-purchased our tickets for the Ngong Ping cable car ride up to the Big Buddha, but we hadn’t anticipated the crowd. Even with our tickets in hand, we waited for about an hour to get on a glass-bottomed car (would have been shorter for the regular), but it was worth it in the end. I’d been there with Liann a couple years ago, so I’d done all the site-seeing and Donnie and Paul were content to hang out in the little tourist village up there. So I walked with Andie and Ben up to the Buddha, then left them to their touristing and met up with Donnie and Paul for some warm sunshine and San Miguel’s. We had some snacks and ice cream after Andie and Ben came back from their exploring and lunch and then we headed back down to the metro and Mongkok. We had every intention of going back out for dinner and the night market, but Paul started running a fever and we were all feeling pretty tired. So we ordered food to the room and let Andie and Ben do their own exploring. 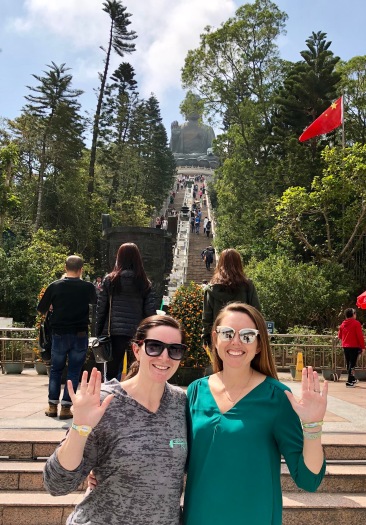 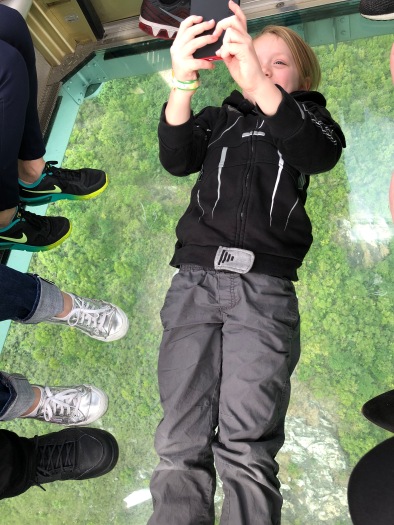 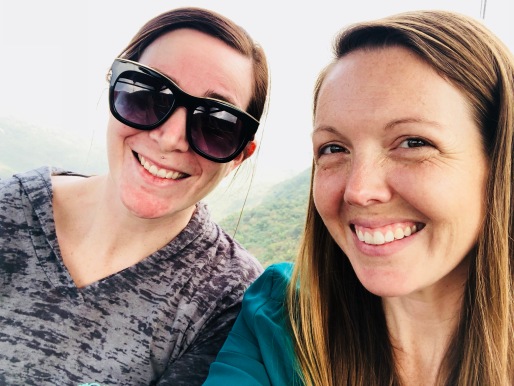 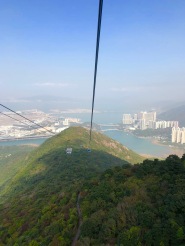 After a rough night with a feverish Paul, I got up early to meet Andie and Ben to go out on another adventure. I’d always wanted to do the Dragon’s Back hike, so I thought I’d drag Andie and Ben to do it too. They were game, so after some research, I figured out how to navigate us there and we set off hoping for the best. It was actually really easy, take the metro to a bus stop, jump on the bus, and it drops you right at the hiking trail head. We were pretty early, so it wasn’t too crowded yet (it was packed when we left), and we set out on our hike. There were some pretty steep uphills, but the views from the top were amazing! The fog was just clearing out so at each new peak we could see new beautiful beaches emerging below. I had hoped to follow the trail to Shek-O and check out that town, but the trail looped us back to our starting point. We saw a beach from above, and decided to check it out before we headed back to the hotel. It was about 750 stairs down, but the beach was deserted and the sun was shining so it was a perfect setting for a snack before heading back up to catch the bus. I was so glad we took the time to go out there and see that side of HK. People don’t realize that there is so much beautiful nature so close to such a dense metropolis. I hope I have the opportunity to go back at least once before we leave. The rest of the day was uneventful, we struggled a little bit getting back to the border (uber wouldn’t take us the whole way and cabs were hard to come by), but we eventually made it home to relax and unwind. 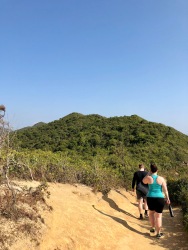 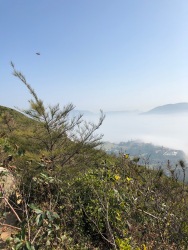 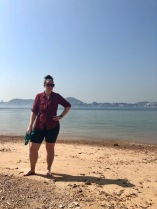 The day after our Dragon’s Back hike was Saturday and it was super lazy. We hung out at home, ordered food and binged watched the new Star Trek Discovery show. It was a great way to unwind after our busy touristing and travel days in HK. It was so nice just to be chill and enjoy the down time.  But suddenly, it was Andie and Ben’s last full day in China.

I had promised them a hike up Nanshan mountain, so we left early-ish  to catch the bus and walk to the base of the mountain. Those steps have always been a struggle to me, and it was the same for all of us that day. But we made it! We hiked all the way up and over to Seaworld where we replenished our depleted bodies with Starbucks and more muslim noodles. We came home, showered and relaxed before rallying to try a new restaurant that Donnie and I had always wanted to try. It is a Sichuan place, right between old Shekou and my school, so we walked over (I sent Donnie ahead with Paul on the scooter to get us a table) and enjoyed a really yummy meal. We ordered so much food, but we were all pretty hungry so we made a good dent in it all. It was spicy, but not too spicy (much to Donnie’s dismay), but sooo good. Donnie and I already have plans to go back. I was exhausted, but was outvoted to go get another massage, this time no cupping! It actually felt really good, and my muscles didn’t have the same soreness the next day like they usually do from a hike. From there we walked home for more Star Trek and ice cream and Andie and Ben started packing for their journey home. 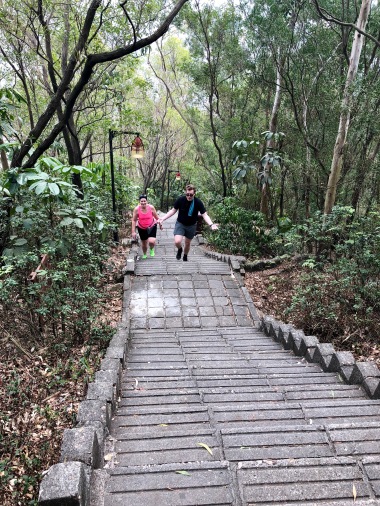 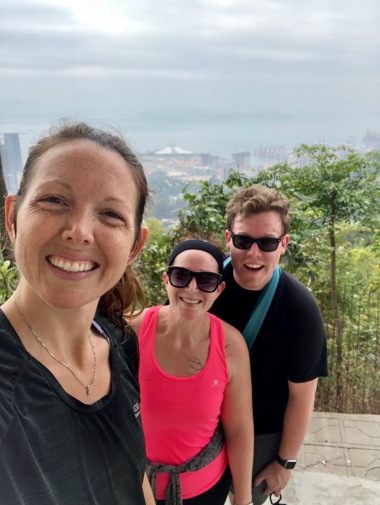 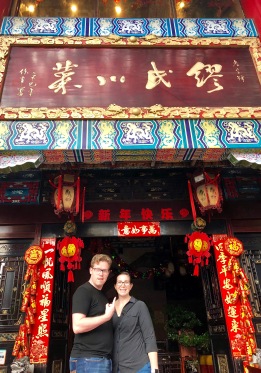 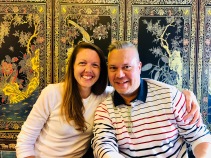 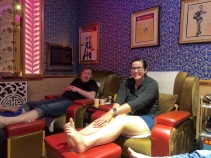 Monday morning was our day to say goodbye. We watched one last episode of Star Trek over breakfast, and then Andie and Ben headed off to the airport in a van with plenty of time to spare. Donnie and I jumped into house cleaning, which has been a process, but is necessary for sure.

I can’t express how lovely it was to have Andie and Ben here. Even though one of them always gets sick (Ben this time), they are game to try everything and anything. I love that we can chill or have a full day of touristing and enjoy every minute of our time together. I know Paul loves having them around too. Thank you Watsons for coming to visit us in China! I’m glad that we got to see you and I’m looking forward to the next time. Love you soooo much!

And now to continue relaxing for the rest of our break. 😉 Much love, J