It was an adventure.

My 33rd birthday fell on a Saturday and Donnie and I wanted to do something different this year. While sitting at Taps one evening, Donnie came up with a novel idea (really not that novel, but new to Shenzhen). He thought it would be cool to do a pub crawl to all our favorite beer bars in the city. Our city is not small, so ‘crawling’ would not really be plausible, but taking a bus would make it so!

So we hatched our plan, Donnie arranged for a bus and I made invitations and opened it up to all the people we know. The plan was to start at Bionic Pop-Up in Shekou, then go to Taps Nanshan, then off to Baishizhou for Peko and Bionic, then to Evil Duck (Crafthead’s replacement), and finish the tour at Taps Coco Park before busing back to Shekou and calling it a night. We had a couple of kegs of our beer to take with us on the bus, and our speakers to jam to some tunes while we hauled across the city.

We had an enthusiastic response! Over 20 people RSVP’d to join us for the evening, some intending to stay the whole ride and some who opted to join us for just a few stops.

On the evening of March 11, we gathered at Bionic Pop-up and started sipping on our first beers of the evening. I was conscious to keep it light, and started with their delicious Crickside Ale. Joe was kind enough to take care of my tab, and before we knew it, it was time to set off for the next stop. 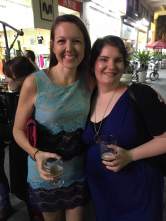 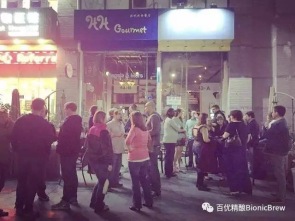 We arrived at Taps Nanshan after a quick ride (we only had half-roadies in the bus that time), and off loaded into the little bar. Daniel (owner of Taps) had forewarned his staff that we were coming, so they jumped into action. We were all impressed with the service, and of course the beer was incredible. I tried to keep it light again with a couple of Berliner Weisse sour beers so that I could enjoy the whole evening. Daniel had texted me ahead of time, and he bought me my birthday beers at both of his locations. Thanks Daniel! 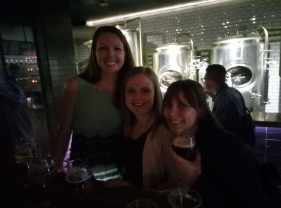 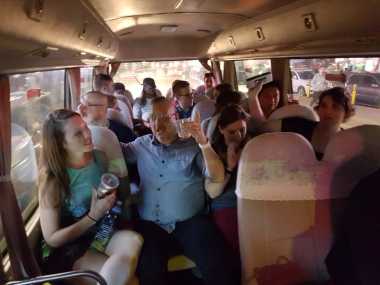 After about an hour, we were ready to board and move along. Our ride was a little longer this time, but we sang, drank and chatted all the way to Baishizhou. I think I saw the bus driver cover his ears for most of the drive. Hehe. Bionic and Peko were ready for us, and we settled in to enjoy the outdoor drinking scene in Baishizhou. Lots of people ordered some grilled food from the place next door, and we tried Hoss’s cider from right out of his bright tank. And we met a few new people, who happened to be from AZ! It was super fun, as it usually is at Bionic.

Our next stop was Evil Duck. Last year for my birthday, we went to Mash and Crafthead. Crafthead is closed now, but the owner still serves his beers and ciders at Evil Duck. I was interested to try his new place to compare it with what I’d known. It’s an interesting place. My friend bought me a berry cider and I sipped on that while chatting with the crowd, who I guess are regulars there. Lots of diverse people, but at the same time there was a feeling of exclusivity, like we were crashing a clubhouse or something. It was fun, nonetheless and after a blink of an eye (and a bathroom break) we were back on the party bus to get to our last stop.

Taps Coco Park is a beautiful establishment, big and new and bright and clean. We didn’t get there until after midnight, so the crowd was winding down, and actually we ran into another birthday party of a girl I play soccer with. The manager, Sylvan, greeted us and guaranteed we’d be taken care of, and then left us to enjoy. It was a blast! We tried new beers and ate delicious food and generally had an awesome time. Taps has been named one of the five best breweries in China by Forbes, and it is easy to see why. I always enjoy my beer and the company at both their locations.

After a long evening, it was time to get back to our side of town. So around 1:30am we boarded the bus for our final ride back to Shekou. I tried to get Donnie to play some mellow music, but he kept the party going until we arrived outside our door. Everybody stumbled off and got safely home, but it was definitely a night not soon forgotten.

I love that we have the opportunity to do things like this here. That it’s not cost prohibitive to rent a bus for the night (only $200!) and do basically whatever we want on it. I love that I know the owners of all of the craft beer places we went, and that I can call them good friends. I love that my community came out to celebrate with me. I can’t say that I would’ve had all that if I had been celebrating anywhere else in the world.

Love to all, J